Iceland is not usually known for food, but for its amazing scenery. Also, eating out in restaurants is very expensive in Iceland. The crash of the Icelandic economy definitely helped made things much cheaper; in fact, we found Iceland cheaper than London when we were there, thanks to the bad economy. However, we were very happy shopping for groceries and cooking in our hostel kitchens. It is true that A is a fantastic cook, so we definitely ate well, despite not dining at that many restaurants. When we did eat at restaurants in Iceland however, we made sure that we went for the best, and we tried the food that best defines Icelandic cuisine, for better or for worse. 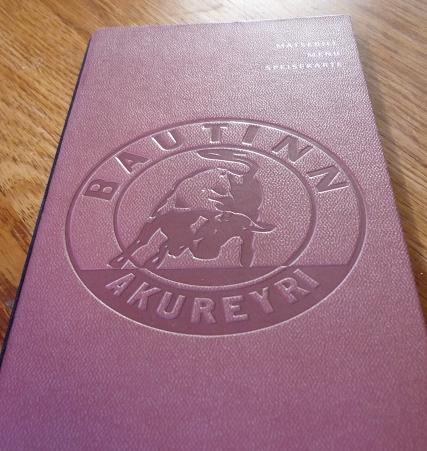 One of the restaurants we went to was Bautinn Akureyri. According to our guide book, Bautinn Akureyri serves a wide variety of exotic meats like whale and puffin, which are commonly eaten in Iceland. We could not miss out on this great opportunity to widen our food horizons, so we went there when we were in Akureyri (North Iceland).

The great thing about Iceland is that the pace of life is very relaxed, and everyone is very friendly. The locals take pride in their very high quality of life, and hence service in Iceland is generally very good. In Bautinn Akureyri we experienced very good service as well, and dining there was a real pleasure.

The exotic meats we wanted to try at Bautinn Akureyri were whale, puffin and horse. Since we didn’t want to stuff ourselves silly and order all 3 mains in one meal, we split it into 2 meals. The first time we were there, we ordered whale, and being much less adventurous than I am, A ordered a seafood stew and a seafood soup, which was something she could fall back on and eat, in case the whale turned out to be disgusting.

Well, it wasn’t disgusting. In fact, it was so good that A liked it more than her seafood stew. (By the way, seafood soup or stew is very good in Iceland. We’ve had it in many of those gift-shop cafes near touristy sites, and every one of them made a seafood soup that could put most restaurants in other countries to shame.) This seafood stew was good as well, but we’d kind of reached a saturation point with seafood stew by now.

The taste of the whale surprised us. Well, to begin with, we didn’t know what to expect, and when we tried it, we found it absolutely intriguing. The texture of the meat is just like a very tender beef steak, yet there is a slight fishy aftertaste. I guess we shouldn’t have been surprised, after all whale is a mammal, so it having the texture of meat like beef shouldn’t come as a surprise; and it lives in the sea, so it is almost part-fish. The whale steak was served with a summer berry sauce on the side, which was lovely.

For our second visit to Bautinn Akureyri we had the puffin (goulimot) and the horse (foal). The foal was very tender, and the texture was a cross between beef and pork. When we first bit into it we were like, okay, so this is how horse tastes like.  It wasn’t a particularly interesting meat for us texture and taste wise, but it was very nice nevertheless.

The puffin was more of a surprise. I guess being such a small bird they couldn’t serve you a huge slab of meat, so it came as 3 smaller chunks, served with a wild herb sauce. A really didn’t like this at all. The texture of puffin is a mix between beef and liver, in fact, it was a little more like liver than beef. A does not like the texture or taste of liver, so it was no surprise that she didn’t like this. She was very happy to finish the rest of the horse dish and let me finish the puffin. Personally, I love liver, so I enjoyed the texture of the puffin very much.

This entry was posted in Iceland and tagged Icelandic. Bookmark the permalink.