We were going to Paris for the weekend, and we wanted to experience eating in a really posh French restaurant for the first (and probably only) time in our lives. We decided to really splurge on lunch at Taillevent, having read awesome reviews about it online. Taillevent was awarded 3 Michelin stars for 34 years, and only recently was it demoted to just 2 Michelin stars. (Hey, if you have to do something only once in your life, make it count!)

The dining room was very modestly decorated, and we were ushered to a table and sat side by side. This gave us the chance to observe the servers at work and the other diners in the restaurant as well. Our servers were all very professional, and we liked how they presented our dishes to us in pairs, laying down the plates at exactly the same time.

Almost immediately after we sat down, we were presented with a plate of 6 bread balls with cheese. I’m probably not doing it any justice by calling it that, but I forget the French name (excuse moi). Being novices at dining in such fine establishments, we didn’t know whether to use our hands or not, and our server very politely told us “it’s ok to use your hands”. So we dug straight in, and they tasted heavenly. The taste of cheese wasn’t overpowering, which was good as A doesn’t like cheese very much, and they were light and almost pastry-like. We should have finished them immediately though, as once they got cold they lost their fluffy texture.

We were offered bread at almost every opportunity, and every single bread roll was still steaming as it was served to us.

We were given an amuse bouche, and this was a delicious foam with foie gras. It was amazing how something so light and inconsequential as foam could be so tasty, and I loved every bit of it. A found the buttery texture at the bottom of the cup too much for her, and I happily offered to finish her portion. 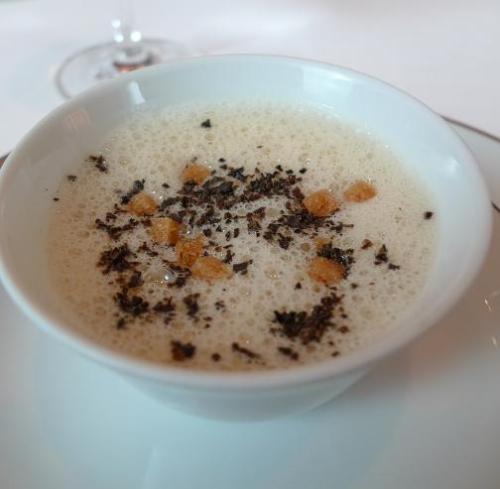 Our starters came next. I had the Pumpkin Risotto, with bacon. The bacon was the most thinly sliced item of food I have ever had, I’m not kidding you, and it was just wonderfully delicate. I didn’t understand the connection between the bacon and the sweet risotto, but I’m sure definitely not complaining! A had a Scallop Carpaccio starter, which was delicious as well. The slightly sour fruit salad it came with brought the entire dish together perfectly. 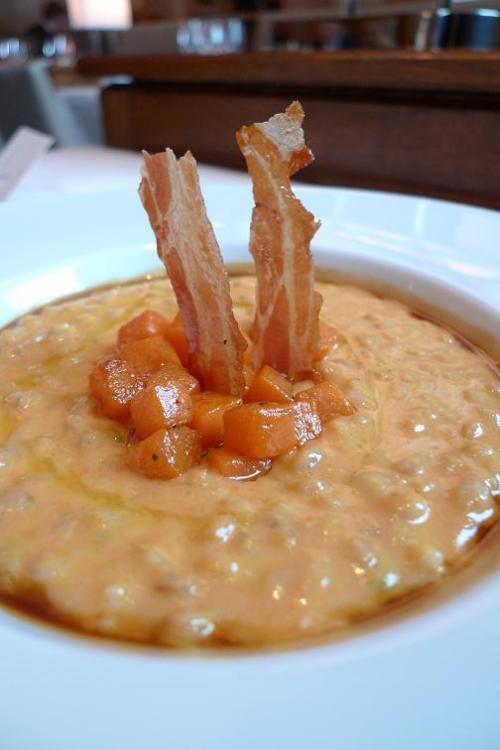 For mains we both had the lamb cutlets which were good, but once again, not the best lamb dish we’ve ever had. The lamb was tender and juicy, and didn’t smell too much of lamb, as it generally tends to. 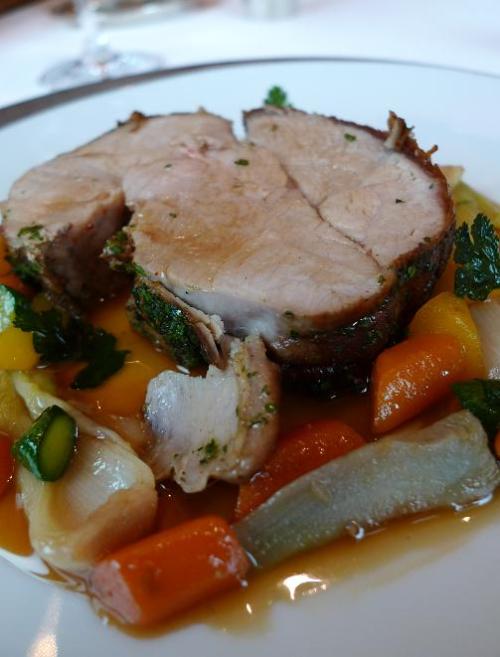 My cheese platter was incredible. I didn’t think I would enjoy the brie initially, but I really did. The apple slices that were served together on the plate were the perfect companion to the cheese, which was not too pungent. A doesn’t like cheese, so she had a salad, which was slightly too over-dressed and too sour for her liking.

Our desserts were both very good. I had the Chocolate puff with ice cream, and A had the Mango with coconut ice cream. The coconut ice cream was surprisingly full of flavor, and the mango lent a nice tropical touch to the dessert. My chocolate dessert was adequately rich without being too overpowering, as I still managed to taste the coconut ice cream that A had after a bite of my chocolate.

Overall, we had a very good time pretending to be members of high society. We felt that the service was very professional and the food very well cooked. Throughout the meal we kept asking ourselves what is special about French cooking and French food. We didn’t come to a conclusion at the end of our meal, as we’re both not experts in this area, so we welcome comments and discussion to help us widen our food horizons.

Additional Comments: Formal wear recommended, and their menu changes constantly, so there’s very little chance of ordering what we had for yourselves.

This entry was posted in Paris and tagged French. Bookmark the permalink.