We have been to Milan, and when we were there we chanced upon this amazing shop selling all sorts of Italian yummies called Princi. So imagine our delight when we realized that they’ve opened a branch in London as well!

We went this time round with QJ and her mum, who was visiting from Singapore. QJ had just been to Italy, and was (and still is) obsessed with Italian cafes and restaurants, so this was the perfect place to have lunch at. The interior of the shop looked almost exactly like how we remembered it to be in Milan, and the selection of pastries and desserts and cooked foods was mind boggling. The staff was entirely Italian and (hence,) there was a very vibrant atmosphere. We didn’t manage to get a table to sit around, so we stood around a high table instead.

Since there were 4 of us, we managed to sample many different items available. Their full selection is amazing, and even with the variety of food we bought, we barely scraped the surface.

Our Lasagna was very nice. It wasn’t perfectly made, or perfectly plated, and looked a little messy, but that just made it seem all the more handmade and it was very yummy. There was a good amount of cheese without being overly cheesy and even QJ’s mum who detests cheese found it acceptable. We desperately wanted to get the rice ball, as we remembered having an amazing one in Princi in Milan. This one contained spiced rice and beef, and it looked a little like a paella after we cut it open. Unfortunately this was a far cry from the rice ball we had in Milan. It was cold and not very tasty. This was our least favourite dish of all. 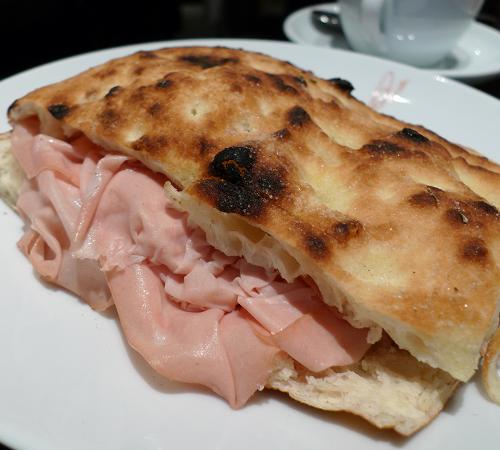 The ham sandwich QJ ordered looked rather plain and boring, but it was actually very good. It was very surprising how much flavor there could be inside that one ordinary looking sandwich. The bread was excellent and lightly salted, and we hardly noticed the lack of cheese in it.

We also had some eggplant and bread rolls. The eggplant came stone cold, which was a pity since it would have been nice if it was a little warm, but it was very well seasoned and very well received by all of us (except A who doesn’t like the texture of eggplant). The bread rolls were easily the favourites of the meal. They were staggeringly delicious. You just have to try them for yourself.

Our drinks were mocha and a hot chocolate. They were both very concentrated, and we would have preferred them much less thick.

We had to save space for desserts since that was the first thing that caught our eye the moment we stepped into Princi. We went for the millifoglie, the pistachio cake and the tiramisu. The millifoglie was a clear favourite. QJ commented that it was a very different millifoglie from what she had in Italy, as it was more spongy than a ‘thousand layered’ pastry dessert. Nevertheless, this was excellent. It reminded A of the typical birthday cakes we have in Singapore, with the fruit topping and it brought us all back to our childhood days.

The tiramisu was good as well, but K thought that it was a little too much coffee in the biscuit and it was slightly too soggy.

The pistachio cake was another winner. It managed to pack a lot of flavor without tasting artificial, which tends to be the case for many pistachio cakes. The berry layer on top gave a very good contrast to the sweet pistachio, and this was (surprisingly,) K’s favourite dessert of the 3.

Inevitably we have to compare this Princi with the one we had in Milan. Very often when restaurants open branches in different countries there is a clear difference in style and food from the original. There are obvious differences between this Princi and the Milan one – for example, your food is already cut into their serving portions at the London branch, while in Milan, customers can choose how big a slice they want, and they are charged according to the weight of their portions. However, overall, we felt that the whole feel of the place is authentically Italian, from the servers to the décor, and the food as well. We’ll definitely be coming back to Princi, to try more of their food and especially their desserts.

This entry was posted in London and tagged Italian. Bookmark the permalink.