Korean Kitchen or Soju was recommended to us by K’s good friend I. After a disastrous exam in the morning, we decided to pay this restaurant a visit to reward ourselves for the hard work put into our revision which unfortunately, did not pay off, but that’s another story altogether. This is the third of our post-exam meals, where we go to a restaurant we have never been to – some ritual we’ve invented to give us something to look forward to in the days leading to each exam.

Soju is situated in Soho, a very vibrant neighbourhood. K remarked that to survive in such a neighbourhood, the food must either be really cheap, or really good. So we held high hopes to find yet another good Korean restaurant. Soju was really empty and quiet when we arrived. In fact, bizarrely, we were the only customers in the whole restaurant throughout our meal.

We ordered our usual: Japchae. This seems to be the yardstick we use for judging the worth of any Korean restaurant. Unfortunately, this was the worst Japchae we’ve ever had. There was something seriously lacking in the dish that caused it to be really bland. Perhaps it lacked some black pepper, or some seasoning, or some spice, or all of the above, we don’t know, but Japchae usually gives our palate a good kick to awake it in preparation for our meal, but this just fell short, and left us just puzzled.

We tried putting it behind, and give the restaurant another chance by having the Kimchi pancake, another dish we order all the time in Korean restaurants. The pancake at Korean Kitchen had a really good texture – it’s the thicker kind, like the one that Koba serves, and was nice and crispy. However, the difference is that Koba serves theirs with a generous amount of kimchi in it, but the Kimchi pancake in Korean Kitchen was distinctly lacking in kimchi.

We also had the bulgogi, which was served on a “sizzling” hot plate that strangely didn’t sizzle. It came with additional sauce on a saucer, and the meat on the “sizzling” plate was rather dry. It was overall a very confusing dish – we weren’t sure whether the sauce was supposed to go into the plate or to be used as a dip, and we couldn’t understand why the hot plate wasn’t sizzling hot as it should have been. This was a very disappointing dish. 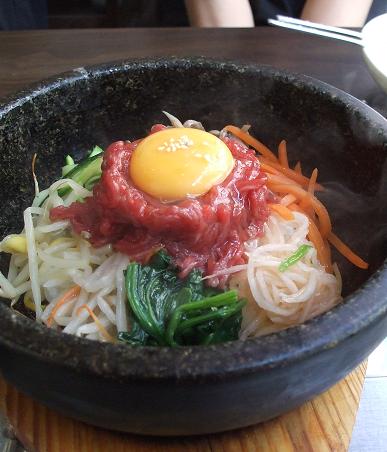 The bibimbap was perhaps the best dish of the meal. However, that’s not saying a lot. It came with a generous amount of raw beef, and a raw egg that cooked beautifully with the raw beef once it was mixed in the hot pot (that was indeed hot thankfully). We would have preferred more of the spicy sauce, but nevertheless, this was an above average bibimbap.

We’ve read many positive reviews about this place, and we were highly recommended to eat at Korean Kitchen by our friend (whose taste we absolutely trust). Hence, as you can imagine, after our meal we were left wondering whether we were at the correct restaurant in the first place. From the complete lack of customers (we were there at typical lunch hours) to the substandard food, we just don’t understand why this place has been given all those glowing reviews it has received. We won’t be back for a second opinion that’s for sure – we have better things to spend our calories on.

This entry was posted in London and tagged Korean. Bookmark the permalink.