We had our first experience of Sichuan food when we celebrated D’s birthday in Chili Cool with their Ma La (hot and numbing) hot pot. We didn’t like the numbing sensation that the spicy hot pot gave us, and we spent most of the meal avoiding those pesky numbing seeds. So, you can say that we started off with Sichuan food on a very bad foot. Since then, D has been using all ways and means to get us back to Chili Cool to try their other dishes, which he said were really good. A had none of it, and flat out refused to go back. I didn’t find the experience as foul, and after reading loads of great reviews of Chili Cool and Sichuan food in general, I was really interested in going back to try out more dishes. However, it seemed like I would never get A to, since she was feeling so adverse to Sichuan food.

So you can imagine that it came as a huge surprise when she said that she wanted to go to Bar Shu, a restaurant that serves Sichuan food. I guess she found out that I was secretly reading about Sichuan food, and finally thought she should give it a second chance.

Bar Shu is one of those restaurants that we pass by on many occasions on the way to Chinatown, but never give a second look. Anyway, the restaurant was quite full when we arrived, and there were many Chinese students dining there – quite a good sign that the food is good.

We tried not to go too crazy with the ordering, partly as we really didn’t want to overeat (as we usually do) and also because of A’s apprehension towards Sichuan food. There were some standout dishes as mentioned by online reviewers which we gravitated towards. We started by ordering starters and street food, and told our server that we would order more after those starters arrived. The menu was immense, and each dish came with a rather large photo of what the dish would look like. That did help our decision to a certain extent, but by the time we got to the last page we had forgotten what dishes we had earlier decided on.

We had 2 drinks – Aloe Vera with Strawberry, and Green tea with Melon. Both were very sweet and satisfying, albeit slightly artificial tasting.

Anyway, our starters came really quickly. These were all cold, to A’s surprise. However, I had read online that the Sichuan appetizers are all cold so I knew what I was getting myself into. The first thing that came was the thin sliced pork in a garlicky sauce. This was amazing. The pork was indeed very thinly sliced, and there were some carrots and some white vegetable (probably radish) equally thinly sliced which were wrapped in the pork. The sauce was fantastic, and each individual piece tasted so absolutely fresh and lively. 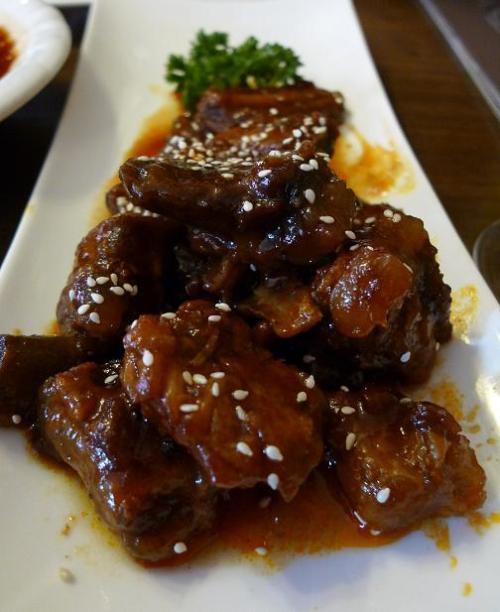 The Sweet and sour spare ribs were advertised to be irresistible on the menu. Indeed, they were very delicious and truly irresistible. However, they were a few shades darker than the photograph in the menu, and slightly dry, but I’m nitpicking here. It was miles ahead of the spare ribs we’ve had in other places. 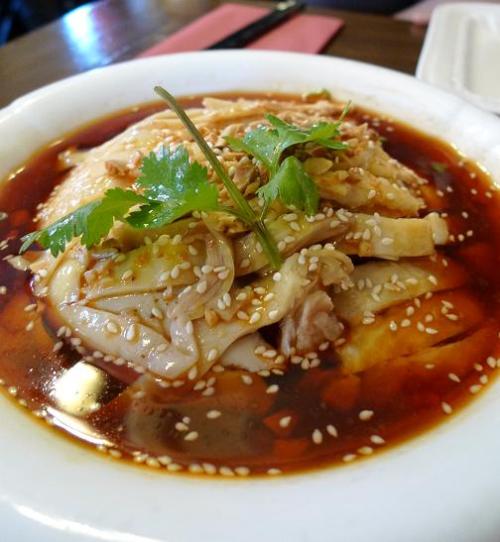 The next dish was Mouthwatering Sichuan chicken. The Chinese name literally translates to saliva chicken, which doesn’t sound appetizing at all, but once you try it you fully understand why. It truly and genuinely makes your mouth water. The dish is served in a bowl of chili oil, which may be extremely off putting for the health conscious, but what the hell; it was one of my favorite dishes of the entire meal. The chicken was perfectly cooked, still very tender and moist, and the thin layer of jellied fats just under the skin made it ultra-smooth and, for lack of a better description, mouthwatering. I think about this dish almost every day since I first had it, and it will be the very first thing I order when we go back to Bar Shu. 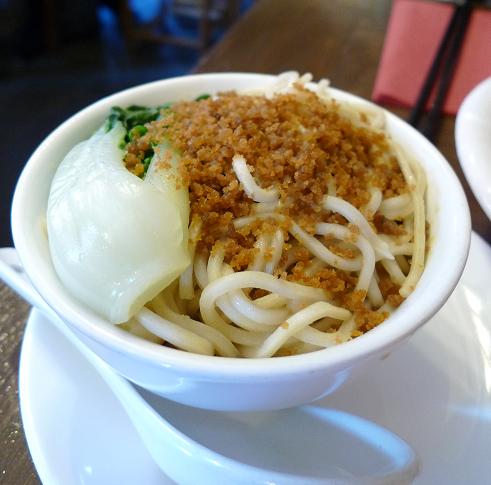 We ordered 2 dishes from the street food menu – The legendary Dan Dan noodles (I swear we’re not making these names up) and Boiled crescent dumplings in chili oil sauce. The Dan Dan noodles were much talked about online, but we didn’t like them. There was a weird spice used that didn’t agree with our palates. The noodles were nice though, but we just couldn’t get over that weird taste in the sauce.

The crescent dumplings however, were outstanding. It’s quite incredible how much flavor there can be in a simple boiled dumpling. All restaurants should take note and learn from Bar Shu’s example.

So far we were more than impressed with the food. We decided to go for just one main to share, and settled on something from the seafood section – Fragrant and hot on-shell prawns. This was one hell of an impressive dish. To begin with, the plate was HUGE. The prawns themselves were also enormous, and there was so much excitement on one plate it was quite exhilarating. This was incredible value for money, and easily one of the best examples of Chinese cooking around. (Sichuan, Chinese, whatever. It was damn good.)

It was truly a pity that we were limited by our stomach capacity, or we would have literally ordered the entire menu. Feeling like we could just about squeeze one more dish in, we ordered ‘Man and wife offal slices’ from the appetizer menu, which was mixed beef offal in a spicy sauce. This was just heaven in a plate. Even A, who usually refuses to eat offal, agreed that it was very good. Alas, our stomachs couldn’t fit more than a few bites in anymore, so we had to take away the remainder of this dish. When we ate it the next day it was still incredibly delicious. The best thing – it didn’t even need any reheating, since it is supposed to be served cold!

We could go on and on about how amazing this restaurant is, which is a huge surprise really, since pre-meal A was dead set against Sichuan food, after that one experience with Ma La hot pot and those offensively numbing seeds. However, after this meal in Bar Shu, our take on Sichuan food has been changed dramatically. We’re even willing to look beyond that chili-oil-all-over-every-single-dish issue. There is no doubt that we will be back for more Mouthwatering chicken, and try more dishes from their menu. In fact, we’ve already picked those dishes that we want when we go back.

Additional comments: Students get 12% off if you pay by cash.

This entry was posted in London and tagged Chinese. Bookmark the permalink.