7 exams down, 1 more to go! For our 7th post exam meal we went to Rasa Sayang, a restaurant in Chinatown serving Malaysian and Singaporean food.

We managed to get there just before the lunch crowd did, so we got our table immediately. Luckily we did, as service was very slow. There were only 2 servers around, rushing from table to table all throughout the busiest part of lunch hour. It was quite strange indeed. We counted 3 empty tables waiting to be cleared while customers stood around waiting to be served. We also waited eternity for the bill.

By our standards we didn’t order a lot. In fact, I thought we under ordered, and was half expecting to order more after we had finished some of our dishes. However, we never got down to doing it. In fact, we didn’t even finish our food.

We shared a drink – Teh Tarik, which is supposed to be a milk tea that has been poured back and forth from a height to give it a thick frothy top. What arrived was definitely not teh tarik. There was no thick frothy top, and it was just diluted and flat. 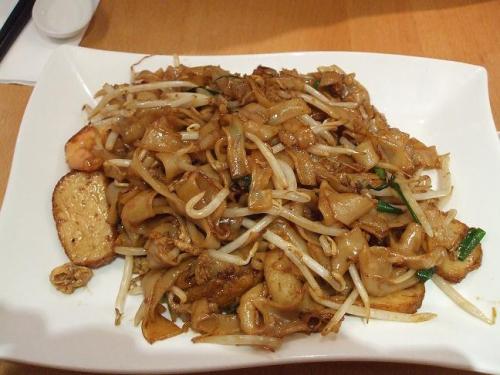 We ordered a Fried Oyster Omelette, Fried carrot cake and Roti Canai, all from the starter section, and a Fried Kwey Tiao to share. Bizarrely the main dish arrived first. The Fried Kwey tiao was uninspiring. We’ve written a review on the Fried Kwey Tiao at Malaysian Kopitiam a while ago:

“This Char Kwey Tiao at Malaysian Kopitiam was far too sanitized. It lacked the oomph and character that Char Kwey Tiao should be. After all, everyone can fry a plate of kwey tiao, but to deserve the name Char Kwey Tiao, one needs to do something magical to that dish. This was lacking that something something.”

The Char Kwey Tiao at Rasa Sayang was a million times worse than that at Malaysian Kopitiam. It was lacking in everything that a Char Kwey Tiao should be. Basically, it should have just been called Fried Hor Fun. Yes, we’re purists – don’t call it Char Kwey Tiao if you’re not going to serve Char Kwey Tiao. Simple as that. 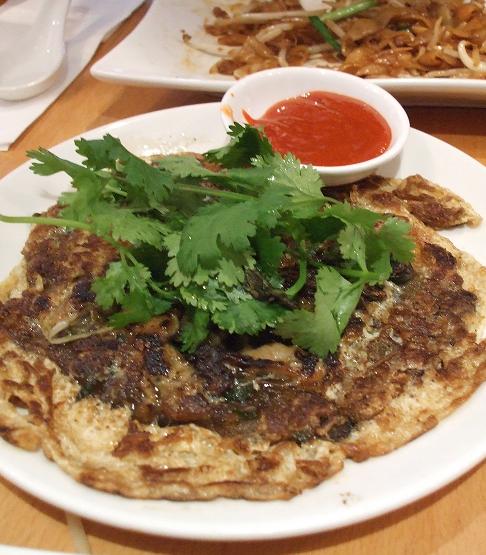 The Oyster Omelette was definitely much better than the Taiwanese version of Oyster Omelette, but it was also a huge let down. The Tapioca flour in the dish started to get really annoying after a few bites. There was a nice oyster fragrance though – something positive finally.

The Roti Canai was another disappointment. Just before writing this I read the latest review (4/6/2010) from tehbus.com about this restaurant in Sydney – Mamak:

“We waited a little while for our table but we admired the chefs in the window tossing up the roti in the air, and crafting a light and airy roti. By the time we took our seats, we were ravenous.”

Dear oh dear, what we wouldn’t give to have that same experience. The roti canai we had was hard and tasteless. It was obvious that it was store bought, and the curry that was served with it had odd bits of jellied fats swimming around, which probably meant that the curry wasn’t even reheated up properly to melt the fats, which then means that the curry wasn’t freshly made, which means that…oh **** it, did I really expect them to make their curry themselves? It was just depressing. I don’t want to sit in a restaurant to eat food that has been reheated from a packet that has been factory made.

And don’t get me started on the Fried Carrot Cake. Even though we didn’t order a lot of food we just couldn’t finish this dish. In fact, we barely ate a few bites. A was shocked that I actually wanted to take away the leftovers. But we did anyway, and had to pay 20p extra for this ‘service’.

And as a side note, something that really baffled me was this small piece of banana leaf that was on every single plate, hidden under the food. Was this meant to exoticize the food? Well yes, many dishes in the South-East-Asian region are served on a banana leaf. That they got right. However, the leaf is supposed to act as the plate, not playing a hide-and-seek game by hiding under a bed of food. This tiny post-it sized leaf was just pathetic, and did nothing but to serve as a bad caricature of Malaysian and Singaporean food. It did not serve any purpose whatsoever. Yes, I am grumpy. I felt like eating at Rasa Sayang was an absolute waste of time, money and calories. Places like these are meant to satisfy our craving for Singaporean food. However, this made me miss it even more.

Luckily for them, they have an abundance of customers. Good for them. They obviously benefit from serving food with novel tastes. However, we know better. This is nothing like the real deal.

This entry was posted in London and tagged Straits. Bookmark the permalink.