For some strange reason there are 2 restaurants called Melati about 400m from each other in Soho. Both are unrelated, but both serve Malaysian/Indonesian food. We had planned to go to the Melati along Peter Street, but ended up stumbling upon the restaurant along Great Windmill Street first. Thinking that it was just a branch of the one along Peter Street, we went in, but we quickly realized that it wasn’t related at all to the Melati that we wanted to go to, so off we went again, navigating ourselves through the confusing streets of Soho till we finally arrived, starving, at the Melati along Peter Street.

So starving we were that we practically ordered their entire menu; actually, no we didn’t, but we had far too much food than we could handle (as we usually do).

Drinks: We ordered a glass of Grass Jelly drink and a glass of Bandung (Rose Syrup). The Bandung was exceedingly sweet, and had probably more condensed milk than one should consume in an entire year, but it was nevertheless oh-so rich and sinfully good. As the ice melted the drink got a lot less cloyingly sweet, but it was definitely something I would order again. The Grass Jelly was far more sensibly flavoured, and also really good.

Appetizers: The Curry Puff we ordered was enormous, and the light fluffy pastry reminded us of roti prata which we really liked, but the filling was a complete let down. Another appetizer we had was the Tahu Goreng, which was horrible – presentation-wise it was a mess, and the tofu was tasteless and the peanut sauce was watery and bland. 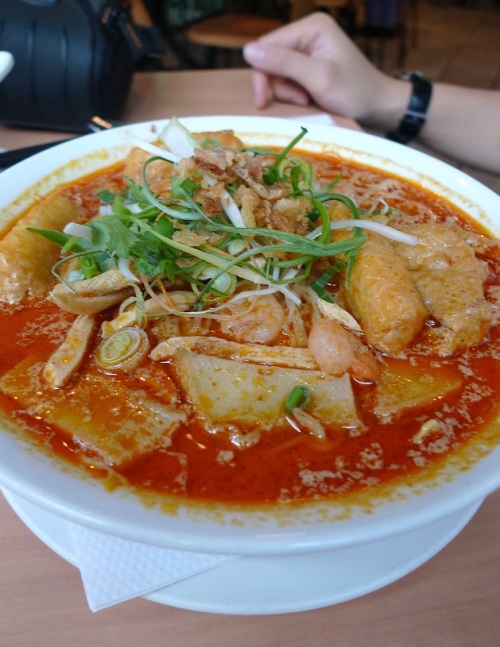 Mains: We had a Laksa, which looked and smelt amazing. Taste-wise it was pretty good, but it definitely paled in comparison to the Sedap version, which is by far the most authentic Laksa available in London, and you can quote me on that.

The Mee Goreng Istimewa was quite disappointing – the noodles were just average and the satay was pretty nice, but the beef rendang was appalling and the pickled vegetables were horrible. The beef was very tough and though it was marinated well, was poorly cooked and did not melt in your mouth as a good beef rendang should.

We also shared (yes, I told you we ordered a lot of food) a Sambal Ikan Goreng, which was probably the best dish of the whole meal. The fish (mackerel) was a good choice to cook in that style and the sauce was tangy and flavourful. The problem however, was that it was more ketchup than sambal.

Service: We struggled a little to get their attention at some points in the meal, which was quite unforgivable since we were literally the only customers around for the most part of our meal, but otherwise they were very pleasant and courteous.

This entry was posted in London and tagged Straits. Bookmark the permalink.