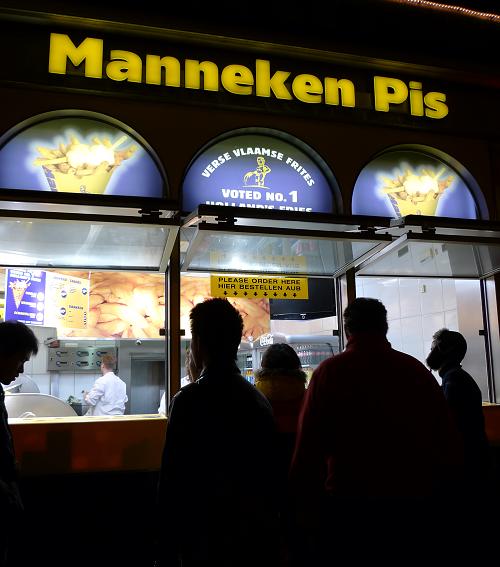 Signs outside Manneken Pis announce that this place sells the best fries as voted by the people. Manneken Pis is Dutch for “little man urinating”. With such a yummy sounding name, and with the public’s endorsement, this is a sure winner!

Well, the fries at Manneken Pis are indeed pretty good. They only sell chunky fries, which is a shame, since we would have preferred having skinny fries over chunky fries. However, they are quite tasty, and you have the option of adding some sauces (at additional cost) over your fries. We tried the curry sauce and the cheese sauce.

The curry sauce was pretty good and got A’s stamp of approval. The cheese sauce was also quite decent, though it was definitely the processed kind. 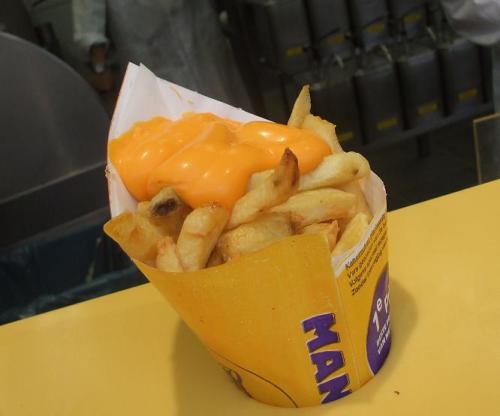 The fries are sold in a paper wrap, which gets soggy really quickly, and can get quite annoying for those who like their fries crispy and fresh from start to finish. Nevertheless, this shop attracts customers by the bus loads, and the fries are perfect for a late night snack in nightlife-heavy Amsterdam.

I’ve been to Belgo in my first year of University, and I remembered it to be pretty good. This time, after 3 years, I’m back, with A, QJ and D. We ordered from the lunch menu, which was quite restrictive, but was enough to capture the flavor of Belgo.

We had a squid salad to start with, which was very appetizing. A good start.

For mains I had spit roasted chicken with a chili and ginger sauce, served with fries. The chicken came rather dry, but the chili sauce was good, despite the ginger, which I usually dislike.

QJ had the salmon fillet, which was quite thin and dry.

Overall, I thought the food to be far from what I remembered it to be. Maybe my palette has vastly improved and evolved since my first year in University, so I was rather disappointed by this meal.